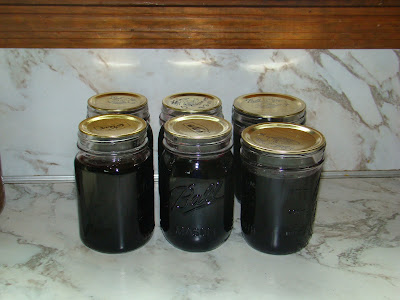 This week we found blueberries at a very good price so the kids begged for us to make blueberry jam. They have learned to like blueberry jam due to a friend that has given us some, made from her parent’s blueberries. I was hesitant at first and actually said not right now but then I walked across the produce area and there were the same blueberries for even .50 cents less! How could I refuse? I saved .50 cents a pint almost instantly!

So we made two batches of blueberry jam that really is very good. The blueberries didn’t seem to make as much as the strawberries did earlier this summer. So we ended up with only six and a half pints. Plus tasting and licking spoons and the pot.

Since we were already in jam mode, we also made a new recipe I had seen just that week. Zucchini Jam! Sheri at The Nourishing Home had posted the recipe. I know it sounds strange and the kids thought that would be so gross. But since I had unclaimed Zucchini in the refrigerator I decided to give it a try. 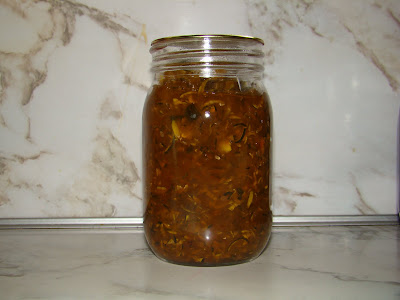 In a large pot, cook zucchini for 10 minutes on medium-low, stirring constantly. Add in the pineapple, lemon juice, and sugar. Cook for 20 minutes. Add Jell-O and boil for 2-3 minutes to make sure the gelatin is dissolved. Ladle into freezer containers, leaving 1 1/2 inch headspace. Put into freezer when cool.

You can also water bath can these. Ladle into clean jars, put lids and rims on, then process in water bath canner for 10 minutes.

This was so good. I actually liked it better than the blueberry jam. It tastes like orange marmalade to me. Plus it is so cheap to make. Zucchini is something around here that if you just know a gardener you get offered lots of it.

What could be sweeter than making jam for school (recipe reading, math, science, home economics, working together, etc) and then licking the pot?