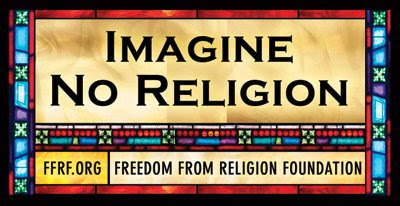 Can you believe that right in the “Bible belt” of Alabama we now have a billboard up promoting freedom from religion?

The release goes on to say “this is the first such freethought (atheist, agnostic) message ever placed in Alabama. The colorful billboard went up just in time to for the annual ‘Glorious Fourth’ celebration in rural Talladega County sponsored by the Alabama Freethought Association this year July 3 through 5. The event is held at a freethought ‘advance’ (not retreat), which includes a lake, air conditioned auditorium and facilities. (It) has attracted as many as 200 freethinkers from all over the south and all over the United States.”

The billboard, the release goes on to say, “is part of a national educational campaign sponsored by the Freedom From Religion Foundation, the nation’s largest association of freethinkers, which works to keep church and state separate…The Alabama Freethought Association is an FFRF chapter.”

Billboards have been placed in 26 different cities in 16 states.

Alabama Freethought Association claims their definition is to “form opinions about religion, independently of tradition, authority or established belief, in favor of rational inquiry.”

The problem is that if you arrive at the decision in favor of religion then you are wrong and deceived! So much for free thought!

Christians have been involved in caring for others since the death of Christ. They took to heart this verse:

Maybe a Derecho windstorm will get it. Similar to the story of the Ark of the Covenant and Dagon.