Thanks to Buddy for sharing this link.

Available online, plus an interview with Doug Phillips. It isn’t quite the same without the big screen but well worth the time! 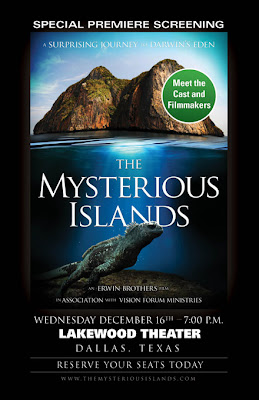 The screening will be held on Thursday, December 9 at the Michael D. Rose Theatre, located at the University of Memphis. Door opens at 6:15 pm, and the 100-minute film will start at 7:00. Following the screening, there will be a short Q and A with filmmakers and crew, along with a poster and picture signing with the cast and crew.

The cost of the evening’s premiere is $10 per family, or $5 for individuals. Space is limited and you must R.S.V.P.

Get the word out and come be a part of this special film debut. Register now!

Last night my family and I went to the premiere showing of The Mysterious Islands. Not only was it the premiere of a Christian Movie it was shown in the home city of many of those who were involved in its production.

After some difficulty there will be a showing of the movie in Huntsville, Alabama tonight.

We want to commend the U.S. Space and Rocket Center (“USSRC”) for opening its facilities to host a private screening of The Mysterious Islands this week. Last week, I reported that Vision Forum was denied an opportunity to rent out a theater at the USSRC in Huntsville, Alabama after we were told we could do so on the date we wanted, November 25. We appealed the decision and found out from talking to the person in charge that the reason we were denied was because The Mysterious Islands was deemed “inappropriate” for this venue because it dealt with evolution. Continue

I don’t know how you can find out ahead of time about venues in your location but you can always sign up on The Mysterious Islandswebsite.

We all really enjoyed it! Beautiful filming of gloriously different creatures made by the God of all Creation.

Do you see no problem with combining evolution with the Bible?

Do you question things like a donkey speaking or the miracles in the Bible?

Do you claim the Bible is inaccurate or full of contradictions?

You are traveling the path that Charles Darwin took.

An interesting detail about this book is that when originally published his negative ideas about Christianity were removed from the book due to the risk of being offensive. Later a granddaughter republished the book with those comments added back in. I wonder how different things would have been, if all along, many of his anti-Christian comments had been known.

But if you think that there is no danger in not believing in the miracles in the Bible just think how far Darwin ended up. When you start rejecting the Bible as true, the miracles as false and the disciples as inaccurate you will be soon traveling the path that Darwin took.

“By further reflecting that the clearest evidence would be requisite to make any sane man believe in the miracles by which Christianity is supported, — that the more we know of the fixed laws of nature the more incredible, do miracles become, — that the men at that time were ignorant and credulous to a degree almost incomprehensible by us, — that the Gospels cannot be proved to have been written simultaneously with the events, — that they differ in many important details, far too important as it seemed to me to be admitted as the usual inaccuracies of eyewitness; — by such reflections as these, which I give not as having the least novelty or value, but as they influenced me, I gradually came to disbelieve in Christianity as a divine revelation. The fact that many false religions have spread over large portions of the earth like wild-fire had some weight with me. Beautiful as is the morality of the New Testament, it can hardly be denied that its perfection depends in part on the interpretation which we now put on metaphors and allegories.” (p.86)

“I can indeed hardly see how anyone ought to wish Christianity to be true; for if so the plain language of the text seems to show that the men who do not believe, and this would include my Father, Brother and almost all my best friends, will be everlastingly punished. And this is a damnable doctrine.” (p. 87)

“At the present day (ca. 1872) the most usual argument for the existence of an intelligent God is drawn from the deep inward conviction and feelings which are experienced by most persons. But it cannot be doubted that Hindoos, Mahomadans and others might argue in the same manner and with equal force in favor of the existence of one God, or of many Gods, or as with the Buddists of no God…This argument would be a valid one if all men of all races had the same inward conviction of the existence of one God: but we know that this is very far from being the case. Therefore I cannot see that such inward convictions and feelings are of any weight as evidence of what really exists.” (p.91)

Compare everything to Scripture, the Word of God, creator of everything created, and let no mere man persuade you otherwise. Charles Darwin (p.153) himself could not have said it better:

“But then with me the horrid doubt always arises whether the convictions of man’s mind, which has been developed from the mind of the lower animals, are of any value or at all trustworthy.

Would any one trust in the convictions of a monkey’s mind, if there are any convictions in such a mind?”